Our friends on the charter yacht "Three Moons" sent us some recipes recently and this one also has me looking for my lobster snare... 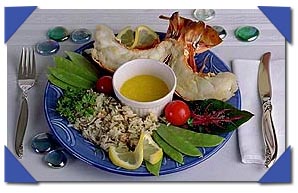 On making your own ricotta cheese...

The other day while shopping I noticed that ricotta cheese had had a big price hike to make it simply too expensive for anything but serious entertaining which is silly as ricotta is more of a basic day to day staple...

As it happened the store in question always has near its end day milk on deep discount and as I passed the milk section I wondered why things I don't use are always cheap and on sale while the stuff I want keep going up.

What did not occur to me at the time is that ricotta is so easy to make (even on a boat) that it's really silly to buy it when cheap milk is available.

Steamy Kitchen is always a must read for us here on "So It Goes" and her recent lobster recipe is a great example of why... 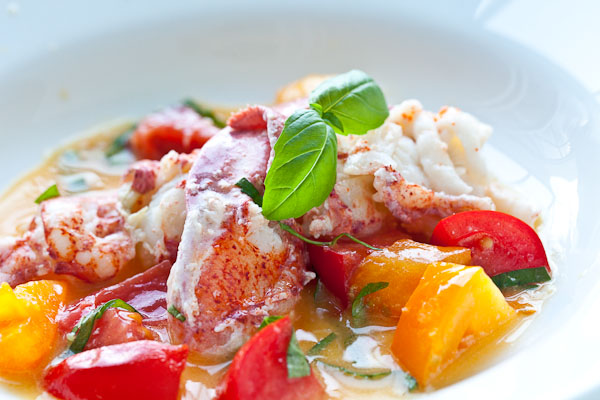 Simple, tasty and impressive so go and check it out and while you do that I'll be looking for my lobster snare ...
Posted by RLW at 7:49 AM No comments:

Back when we were living in France and cruising about, eggs were a non-problematic issue as they were mostly not refrigerated. In fact, it was illegal for anyone to sell refrigerated eggs in France and this was no bad thing...

It might surprise most people but refrigeration radically cuts down on the shelf life of a lot of products, especially eggs. In the States and down here in the Caribbean almost all eggs are refrigerated and unless you keep them refrigerated they tend to go off. 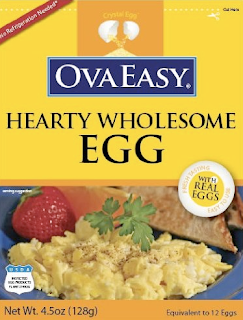 The other day at the local discount store they had some packages of dried eggs with a clever name. My last memories of dried eggs was the sort of awful breakfast you'd find yourself trying to feed to feral dogs in the boonies of SE Asia (who, I might add, had better sense than to actually eat it). So dried eggs are not exactly a warm & fuzzy memory.

Old memories aside, with the recent problems with eggs and the recalls, I've been somewhat nervous about buying eggs of late and so with a "what the hell" bought a package to give them a try...

The verdict after trying them is way better than expected. In fact, hardly any difference could be found between the OvaEasy eggs and those that came fresh out of a shell. The downside, of course, is that if you sre like me and addicted to over-easy eggs with runny yolks, you're just plain out of luck. On the other hand, for doing omelets, scrambled and general cooking purposes, the OvaEasy eggs are excellent and for a cruising boat something of a slam dunk!

The cost down here was $3.39 for an envelope containing the makings of a dozen eggs which is not too much higher than what a dozen eggs go for locally. One thing that surprised me about our price when compared with stateside pricing, $3.39 is actually cheap. I'll be seriously stocking up on these next time I go to the store.

Lobstersquad on how to poach your chicken in a pressure cooker...
Posted by RLW at 7:10 AM No comments:

Liz Clark gets serious in the galley...

Stone Soup is talking sourdough and we should be listening!
Posted by RLW at 10:26 AM No comments:

Squid... it's what for dinner!

Squid is pretty awful when cooked wrong (well unless your tastes run to old bicycle inner tubes) but Serious Eats tells us how to cook it just right!
Posted by RLW at 5:08 PM No comments:

A years supply of food...

I noticed today that CostCo has a deal going on dried and freeze-dried foods in a years-supply-for-one-person selection that comes to a total of $799.99... YOWZA! That said, like all of the years' supply of food kits I have seen, the selection of actual food selection is somewhat dire but there is a lot to be said for $2.19 a day price tag!

Over the last couple of years we have been making an effort to incorporate more dried and long-life foods into our diet for a variety of reasons...

One being that the cost of food in the Caribbean has been getting more and more pricey and a second reason is that while the prices of produce and suchlike keep getting higher there seems to be an inverse situation with quality. As the prices go higher the quality gets more dire. Case in point: the other day we were shopping and the scraggy/gnarly only good for pressure cooking carrots were selling for $1.79 a pound as opposed to the normal 69¢... OUCH! It's scary when meat has become cheaper than vegetables!

Another reason being that, living down here in the Caribbean, we often have periods where some produce and other foodstuffs just don't make it down to the islands. Sometimes for  a week or so you will have empty shelves in the supermarkets until the next container ship from Miami makes it down... It's a bitch being at the last link of a distribution chain whether it is toilet paper, cat food or broccoli!

Canned goods have fallen out of favor here on "So It Goes" as the quality of cans are such that they tend to rust in short order and we have never liked canned vegetables (we'll make an exception with canned corn or green beans) but for the most part, canned goods just don't cut it as far as we are concerned.

Dried vegetables on the other hand are pretty good as they store well, taste good (drying actually intensifies flavor) and are pretty reasonable cost-wise. The downside is that there is bugger all in the way of how to cook with dried vegetables cookbooks of a culinary bent and the learning curve in how to use dried food is something of a steep sucker.

Getting back to the CostCo stuff, I should point out that most of the purveyors of dried fruit and vegetable are not really boat-friendly in that they are seriously into bulk packaging which for most companies starts at number 10 cans (1 gallon) and goes up from there... I don't know about you, but trying to stow 84 gallon sized cans around the boat is somewhat problematic or in the case of our 34-foot boat, simply impossible.

Which is one of the reasons we like companies like Harmony House as they have a variety of sizes that range from a cup (sample size), quart pantry size, and in gallon family sized jugs (not cans) which are all very boat friendly resealable packaging and sizing. An added bonus of the smaller packaging is that you can try something and if you don't like it you are not stuck with nearly a gallon of beets (or whatever) that you hate!

For us, the advantage of having a store of dried food is that when carrots reach a silly price, dreadful quality or are simply not available where we happen to be, we can still have carrots or whatever on the menu tonight...
Posted by RLW at 2:33 PM No comments:

RLW
I'm never sure whether to describe myself as a film maker who sails or a sailor/boatbuilder who makes films...Either way I'm a pretty happy camper when all is said and done.